My project was inspired by Drake’s song Hotline bling. Instead of making colour changing backgrounds like the music video, you can dance to glitches instead. The idea is to dance with a light sensor attached lily pad, and change the projection colour by shining light onto the sensor. Most preferably with a mobile phone. Because, you know, it’s a song about a hotline/phone.

First I had to write up the code for Processing. The idea behind this code, is to have two different colour glithces. The first one is for when sensor detects no light, and the other is for when it senses light. The code also records every single glitch into its processing folding. Which I will later use to make a flip book as the physical object.

After that I had to upload the code on Arduino, so that it can link the lily pad with processing.

Setting up was easy. I just had to put a projector in front of a white wall after dark. I tried a few different distance and I think 15 feet is a good distance. The camera I used was a Canon 60D with a standard lens. A wide angle lens would have been even better. After a few test run projecting the glitches onto the wall and on Dasha( the greatest dancer!) We began to film.

So once Dasha is ready, I begin to play the song on my speakers, so she can dance to the beat, and there you go! The hotline bling glitch is complete! 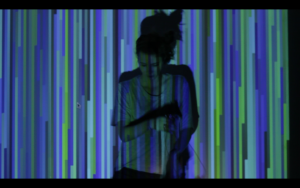 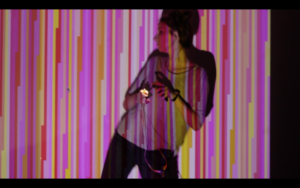 Here is a video of the binding process with the same binder we have at school.

To make the physical object for the box, I collected all the glitches from the filming process, and separated them by colour. Then I printed them out, 4 per A4 paper. cut them out and made them into flip books. 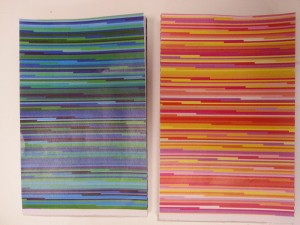 Here are the two colours when I printed them. 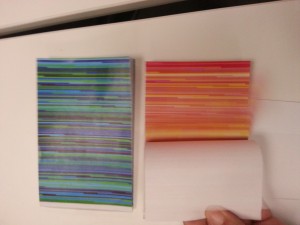 Flipping through the books, to make it easy to flip the edges need to be cut properly. And turned out, the book was too big in size and it needed to be cut down for the actual box. So the final product isn’t the complete screen shot, but a fraction of it. Though if I have to do it again, I would print it small so each page is a complete screen shot.

This was a fun project, and I really enjoyed doing it. Not only was it something in trend, but it also includes my love for glitches. In the future, I would love to do  more interactive projection art. It is the best kind of project when there can be participation from the audience! Also If I will continue on this project, I would make the light sensor easier to hold, because during filming, the biggest problem we had was the sensor falling off the lily pad. Perhaps I should make a box to contain it, so that it can stay intact when it is in use. All in all, I think this is one of my more successful project, and I am happy to share it with the internet. Below is a link to the insturctables website, I hope you will have fun making it too!

← Previous Post
This is the portfolio of the class "Artisanal Tech (Fall 2015)" teach at the TNS Parsons Paris.